For the second year in a row our church, More, held a Seter Supper to commemerate The Passover. Michael and I were not able to attend last years event because we had just had Ephraim and I was too terrified to breast feed anywhere but my own home. Needless to say, we were both very excited to celebrate the Seter with our tribe. This was not my first Seter. My family used to have a Passover meal as part of our home group when I was a kid. This Seter I was very excited to experience having been to Israel two years ago and experiencing the Holy Land firsthand.

The menu for the meal was already set, there would be lamb and brisket, green beans and the rest were traditional Jewish delicacies like Matza Ball soup, Matza muffins, and Blintzes. Several women in the church were asked to prepare these cultural favorites and I was one of them. I was assigned the blintzes which apparently are similar to a crepe. I have never made a crepe, but I knew it was like a small, paper thin pancake. I also knew that crepes were fairly difficult to master. Oh well, how hard could it be? Famous last words.

I should have known I was in trouble when I was instructed that these had to be made the same day as the Seter. They couldn’t be made ahead of time like some of the other baked goods. I also should have known when my phone started ringing at 10:00 a.m. and found some of the other women assigned to make the blintzes frantic on the other end of the line. I had a doctors appointment that morning and was not able to get the project underway until about 1:00 that afternoon. Just as I was beginning to start the process my mother called (who was sort of in charge of the blintz making) saying not to use the original recipe. She was bringing me a new recipe and some additional ingredients: potato flour and matza meal as well as another 2 dozen eggs. Apparently the Jews really like to use eggs. Mom showed up about 2 o’clock and I started the blintzes.

The basic directions were to whisk 6 eggs until light and fluffy and then add them, along with 1 1/2 cups of water, to the matza meal and potato flour that had already been sifted together. The directions said to blend until smooth. I am pretty sure I could have blended for hours and that mixture was never going to get smooth. It was a nasty, lumpy mess. The only thing I knew to do was keep adding water. That seemed to help thin them out, but when placed on the griddle they would only cook on one side. I had no choice but to flip them and cook on the other side as well. This would have been fine, except that once all the blintzes were cooked and cooled they were to be stuffed with a cheese mixture and then wrapped (folded up) and fried in oil (oh joy). Since they had been cooked on both sides already it made the process of wrapping them very difficult. When I tried to fold them up they would start to break and the cheese mixture would run out into the oil. It was becoming quite clear that these blintzes were not going to work out as intended. I finally decided that I would just bring the flat, pancake like blintz thingies to the church in a big casserole dish and bring the stuffing mixture in a seperate bowl. I figured if anyone wanted to actually risk eating these things they could just get a pancake and spoon the cheese mixture on top.

Somewhere in the middle of all this chaos Ephraim awoke early from his nap. I had no choice but to get him up and put him into his pack-n-play, which I had moved into the kitchen. He pretty much just sat there and watched his frazzled and filthy mother stomp around her stinky, messy kitchen trying in vain to salvage the blintzes. Finally, Michael came home and was able to take over Ephraim duties while I finished up. Michael took him out in the backyard to swing while I continued cooking. It was during this time that I made the decision to put all the cooked blintzes into the casserole dish. I had no available counter space so I moved the dish to our pub table. About this time Michael came in with E and put him back into the pack-n-play. He also moved it slightly backward, toward the pub table. I am sure you can imagine what came next. Yep, Ephraim reached a little paw out of his pen and grabbed the aluminum casserole pan, pulled on it and dumped all the contents onto the floor. I didn’t know whether to laugh, scream or cry. I think I did all three. I decided not to completely freak out and knew I had one of two choices: employ the less than 10 seconds rule and figure what unsuspecting eaters don’t know can’t hurt them -or- chalk this event up to fate and know that my son just saved me from forcing 200 of my favorite people from ingesting food that was slightly less than edible. I opted for choice number two. I loaded the 20 or so completed blintzes into a new casserole pan and headed to the church. The Seter started at 6:30, we arrived at 6:15.

Thank God this was a real Seter and we used real wine, not grape juice. I don’t think I have ever needed a stiff drink more!

The evening was amazing. The ceremonial acts and recitations were so incredibly moving. If you have never celebrated a Passover Seter I encourage you to find one to participate in next year. It is truly wonderful. Just don’t let anyone talk you into making the blintzes!

Here are some pictures of the days destruction! 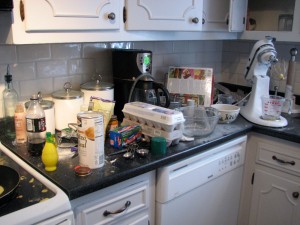 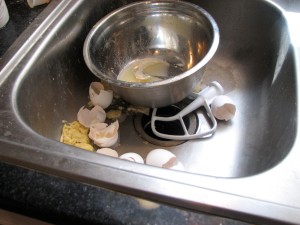